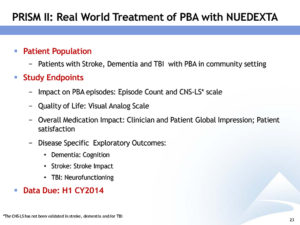 PseudoBulbar, more commonly referred to as PBA, can cause untold heartache, embarrassment, and frustration for people who suffer from the condition. That is why finding a treatment that works is certainly a worthwhile pursuit. If y
ou, or someone you know, suffers from PBA, you may have heard that Neudexta can be used to treat the condition. Is this a viable option? Let’s take a look at a few of the details involved.

To understand whether a particular treatment has the potential to make a difference in the life of the patient; it is important to understand the nature of the condition.

PBA is seen in people with certain neurological conditions or brain injuries. The condition or injury causes damage to the brain area responsible for controlling how emotions are expressed. In effect, the brain signals can become disrupted; this disruption shows itself in the form of episodes of laughing or crying. These episodes are involuntary and spontaneous.

In general, the outburst of emotion can be described in one of the following main ways:

In the case of inappropriate outbursts, the person may suddenly begin to cry or laugh, even though the way they feel does not match their outward outburst.

Exaggerated outbursts may have an emotion that matches the situation. However, the sentiment is expressed much more intensely or for a longer period than would be viewed as normal.


Interestingly, the name of this condition very well describes the effect it has on a person’s life. ‘Pseudo’ means false and ‘bulbar’ means brainstem, indeed an appropriate term to describe such involuntary outbursts which do not reflect how the person actually feels.

What Are The Main Symptoms Of PBA?

The typical symptoms that a person suffering from PBA will display are outlined below:

– A neurological disease or brain injury

– Outbursts of crying or laughing

– Outbursts which are uncontrollable

– Outbursts which are brief

– Outbursts which are exaggerated

– A lack of connection between outbursts and underlying feeling.

A Look At How Nuedexta Can Treat PBA

Now that we have a clear understanding of PBA, including the typical symptoms and why the condition exists, it will be easier for us to understand how a particular treatment can make a difference. Indeed it is already clear that PBA is a condition which can cause considerable upset and embarrassment, hence finding an appropriate treatment could make a significant difference for good.

Neudexta has been approved by the U.S. Food and Drug Administration for the treatment of PBA. A study known as the PRISM II Study showed considerable improvement of PBA in patients who have Alzheimer’s, traumatic brain injury, stroke, as well as other forms of dementia. The study saw a noted improvement in the number of uncontrollable episodes from which each patient suffered. In fact, the baseline was around 12 outbursts per week, however after 90 days using this treatment they had decreased to an average of two per week, a very noteworthy finding.

A closer look at a few more details of the study gives further evidence as to how effective Neudexta can be in easing the embarrassment and frustration experienced by people who suffer from PBA. The study included 367 participants over the course of 90 days. At the end of the study clinicians said that in 77% of the participants the PBA symptoms were either ‘much improved’ or ‘very much improved.’

So What Is Nuedexta?

Since it seems clear from the PRISM II study that a significant body of evidence exists in support of the use of Nuedexta to treat PBA, it would be interesting to understand what makes up the drug. Details of the two principal components are outlined below:

This element is active in the central nervous system.


It is also vital to understand that Nuedexta can interact with other medications which are currently being taken by the patient. The doctor will either make an adjustment to the dose of the current medication or use a different treatment if this seems to be the best option.

How Is Nuedexa Administered To Treat PBA?

Nuedexta is an oral drug and is administered in capsule form. A patient will start by taking one capsule each day for a full week. At the commencement of the second week, the dosage will increase to two capsules daily. The pills are given separately, with one being given every 12 hours. Two capsules are the maximum dose, and patients should never take more than this within a 24 hour period. If a patient misses a dose, they should simply skip it and wait until the next scheduled dose.

Do Any Self Assessment Tools Exist For People Who Think They May Be Suffering From PBA?

There are five key elements that people can think about when considering whether PBA may be a problem for them or for someone they know. These five elements are outlined below:

– Does the person have a neurological condition? (This may be multiple sclerosis, stroke, traumatic brain injury and such like)

– Does the person have involuntary outbursts of laughter or crying?

– Does the person burst out laughing or crying in situations which are not appropriate?

– Does the person have emotional outbursts which seem exaggerated concerning the situation?

– Does the person find it impossible to control their outbursts, even when they try to?

Analyzing the answers to the above five questions should put you in a good position to decide whether you or someone you know, may potentially be suffering from PBA. In fact, even if you do not answer yes to all of the above questions, PBA may still be an issue. In general, if your reply to the first question, as well as at least one of the other problems, is yes, you should raise PBA as a potential problem.

Family members, as well as friends, of a person suffering from PBA, will likely recognize that such outbursts are not usual, with the matter becoming a cause for concern. It is important to remember that a person who is suffering from PBA is undergoing a stressful condition. The outbursts can cause embarrassment and frustration for the sufferer, even having a significant impact on their relationships and their desire to engage in social activities. It stands to reason that finding a treatment which can reduce both the frequency and the severity of such outbursts could certainly contribute to an improved outlook and enhanced social opportunities for the person with PBA.

How Quickly Can Nuedexta Make A Positive Impact On Someone who Is Suffering From PBA?

The positive response to Nuedexta can be seen within a short period, in fact in as little as one week, symptoms of PBA can be significantly reduced.

Indeed the road to having Nuedexta approved and its start to make a positive impact on the lives of people suffering from PBA has been a long one. It has taken ten years of research and development for Neudexta to be approved. For patients who respond to Neudexta, the change to their quality of life can be very significant. The treatment can give people the opportunity to get more enjoyment from life, something which PBA can certainly hinder.