Like many medications, Nuedexta may be used for a variety of purposes. Primarily, it is prescribed for a specific mental or mood disorder that is known as the pseudobulbar affect. This particular disorder is associated with a number of brain conditions, including ALS, stroke and multiple sclerosis. There is also some research to show that it may be beneficial for use in individuals who are suffering from dementia.

There are 2 different active ingredients in Nuedexta that work together to help control the symptoms of pseudobulbar affect. One of those medications is dextromethorphan, which is typically prescribed as a cough suppressant. It works in the brain by affecting the signals that may cause the cough reflex to trigger. It is not prescribed for coughing that is associated with asthma, emphysema or other similar lung conditions. This may help with the outbursts of inappropriate and uncontrollable laughing or crying associated with that condition. The other drug, quinidine, increases how dextromethorphan works in the brain.

disease who are experiencing dementia. The study involves some 220 patients suffering from Alzheimer’s and the drug was shown to have a positive effect on their agitation over the course of the 10 week trial.

Alzheimer’s is the leading cause of dementia, although it is not the only type. Dementia may also be caused by additional issues, such as Parkinson’s disease, vascular dementia and dementia with Lewy bodies. It all has the same general effect, however, and that is causing an individual to lose cognitive abilities to the point where it interferes with their daily life.

It has not been shown if Nuedexta is effective in treating other types of dementia other than Alzheimer’s dementia. Further studies may be necessary in order to test that possibility. 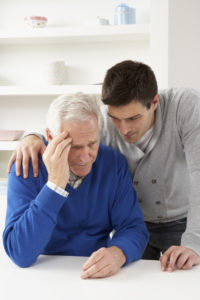 One of the positive aspects of the test dealing with Alzheimer’s patients is the fact that it eased the symptoms of agitation but did not worsen the symptoms of dementia, including thinking, memory and judgment. Aggression is a common sign of dementia as it continues to progress. It may start out with some restlessness but eventually, could lead to aggressive behavior such as fighting, yelling or destroying things.

Physicians feel that it is always best to manage problems associated with dementia without medication if at all possible. There are going to be times, however, when individuals need medication to control those symptoms. Some of the antipsychotic drugs developed for bipolar disorder or schizophrenia, for example, are often used for individuals with dementia. Those medications can have some severe side effects, however, and may even promote an accelerated mental decline along with heart complications.

Nuedexta may provide a solution to help ease the problem with aggression in dementia patients without having to use those other, more dangerous drugs. There are some potential side effects associated with Nuedexta but they tend to be less difficult to manage as those associated with antipsychotic drugs. Some of those potential side effects can include dizziness, digestive upset, weakness, swelling in the extremities and drowsiness. As with taking any medication, it would be necessary to monitor the possibility for side effects and report anything to the physician.

The decision as to whether to prescribe Nuedexta for the treatment of dementia is one that is up to the doctor. Additional test will continue to be run to see if it is a viable solution for the treatment of aggression in Alzheimer’s dementia patients. The tests that were done so far, however, appeared to be positive in the fact that it did treat the aggression but did not hasten the mental decline that may be seen with the use of other drugs.

It is interesting to note, however, that physicians do have the ability to prescribe medications for uses other than the primary use if they feel it is appropriate to do so. It may be worth speaking to your doctor if you have a loved one with dementia and would like to see if the medication could control the aggression that they are experiencing.