The Class of the Drug Nuedexta

Using Nuedexta to treat PseudoBulbar Affect, also known as PBA, but what Is PBA? 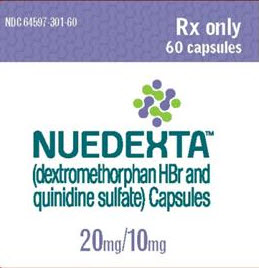 PBA is the acronym used for PseudoBulbar Affect. It’s a neurological condition causing sudden, frequent episodes of uncontrollable laughing and crying. It can be caused by a stroke, Alzheimer’s, dementia, TBI or traumatic brain injury, Multiple Sclerosis or MS, Parkinson’s Disease, Other neurological conditions and even unknown causes.

During an episode, the patient may suddenly, without warning, begin to laugh or cry without reason. It doesn’t necessarily have anything to do with the current situation at hand and will seem out of character for the person or the situation. It is distinct from other emotional disturbances in that it happens very suddenly without rhyme nor reason.

It’s often very unsettling to the patients as well as to those around them. It may be confusing to try and understand why they have the episode and they may be even more upset about the event as it won’t even begin to match the situation at hand.

What Can Be Done To Treat PBA?

Doctors today can prescribe a medication for PBA called nuedexta®. It’s not completely understood how the drug works although doctors do know that it acts on the brain to change the chemistry to alter the emotions. It’s been approved by the FDA to treat PBA.

How is Nuedexta Classified?

The medication Neudexta classification belongs to a category that works on the central nervous system. It is made up of dextromethorphan (20 mg) and of quinidine (10 mg) AKS dextromethorphan hydrobromide USP and quinidine sulfate USP. It is not a controlled substance per the Controlled Substance Act or CSA.

Based on the class of Nuedexta, though it’s not considered a controlled substance, it’s one of the drugs still only available as a prescription. The FDA approved the drug for effects of PBA. It helps to alleviate the uncontrolled outbursts of crying and laughing. Doctors may also prescribe the drug other reasons that aren’t typically listed for the medication.  It is considered a Class I Antiarrhythmic agent quinidine.

Is Nuedexta An Anti-Depressant?

Are There Any Serious Side Effects To Nuedexta?

The most common side effects with Neudexta include stomach pain, diarrhea, excessive gas, dizziness, cough, swelling of hands and ankles or feet, vomiting and urinary tract infections.

Many patients state that it feels as if they have the flu. Liver tests may also have abnormal results. If the side effects are severe, it’s important to contact your doctor right away and follow their guidelines.

Some patients have been found to be allergic to some of the components in the product. Any side effects that aren’t on the list of effects should be reported to your doctor and the pharmacist immediately. Known interactions occur between oral Nuedexta and certain antiarrhythmics.


Typical dosing treatment protocols involve an oral taking of one capsule daily. After one week a patient’s dosage may increase up to two capsules daily taking one capsule every 12 hours.

While Nuedexta isn’t a controlled substance, doctors have been cautioned to carefully monitor patients who are on the prescription for any ill side effects. Some patients are more sensitive to the medications that make up Nuedexta than others.